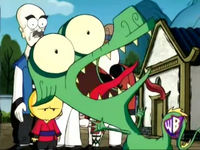 The episode starts off very nicely by misleading the audience.  I thought that Omi, who wants to be the best at everything and by doing it himself, would go through some character development to be a little more humble.  This is not the case however.  Raimundo gets his turn in the spotlight by accidentally letting the seed out of the vault.  This episode follows a pattern of most episodes where Master Fung tells the monks to “not do this” or “don’t do that,” and the pattern results in the unwanted event happening.  The pattern is true here as well, and doesn’t really surprise the audience when Jack and Vlad steal the Heylin Seed.

On the Heylin side of this story, it’s nice to have Vlad make a return.  He only appeared in one episode prior to this one (and no episodes after this one), so giving him another chance at being evil helps keep this show from falling into the same villain tries and fails each episode pattern.  However, Jack’s technology seems a little too advanced, even for a cartoon.  Jack was able to make a Shen Gong Wu tracking device after having seen some Shen Gong Wu.  Here, he is able to track the Demon Seed without ever having seen the seed.  It seems a little out there for him to be this technologically advanced.  Another confusing moment is when Jack and Vlad toss the seed away, thinking it’s worthless, and the water from the fountain moves to the right to water the seed.  I know the creators wanted the seed to come to power and raise havoc, but this seems a little farfetched.

As for the seed itself, it is a great villain.  With Master Fung and Dojo’s speech, the Heylin Seed is built up to be a terrible force, and it meets that when it is finally revealed.  Having the ability to turn people (and dragons) into plants is impressive, and his skills with his vines are threatening.  It’s also nice for Omi to be out of the spotlight and not be able to fight the seed with his element.  Too often, Omi is the monk who saves the day.  As expected, Raimundo, the monk who caused the problem in the first place is the one to redeem himself, and battles the Heylin Seed for the Moonstone Locust.  The showdown itself was very nice, with Raimundo not beating Gigi with brute force or strength, but with his cleverness and Gigi’s own power.

The end of the episode takes away from Raimundo’s character development instead of increasing it.  I know that they meant for him to accidentally kick the box the Heylin Seed is in as a joke, but it takes away from Raimundo trying to be more focused. Yes, it was an accident, but he wasn't focused enough to realize what he was doing.  Overall, the episode is good.  Due to time constraints, the unleashing of the seed is a little unrealistic, but the seed itself plays a good threat.  Raimundo gets a moment in the spotlight, and learns to be more focused, although it is taken away a little at the end.

Retrieved from "https://xiaolinpedia.fandom.com/wiki/User_blog:LevenThumps/XS_Reviews:The_Demon_Seed?oldid=27614"
Community content is available under CC-BY-SA unless otherwise noted.