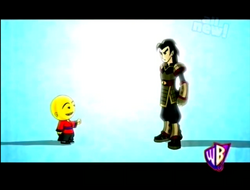 Season 2 of Xiaolin Showdown left fans with a very big cliff hanger. Wuya is brought back to life, Omi is on the side of evil, Omi is turned into one of Chase’s cats, Jack is on the side of good, and the world has been split in half. This conclusion to the Omi arc started by Chase Young had a lot to live up to, and it certainly paid off.

The theme that is seen continuously throughout the episode is Omi’s dots, the nine dots that glow on his forehead when he concentrates. Chase Young has the dots when Omi swears loyalty, the end of the episode has the dots floating back towards Omi, and Omi says they can defeat Chase by getting back his dots. However, it isn’t explained why these dots are powerful or how they are powerful. Granted, they do have time constraints when making a half-hour television show, but it leaves the viewer a little confused at the purpose and power of the dots. The story of this episode is excellent. Unlike the majority of Xiaolin Showdown episodes, this is not a filler episode. Good Jack Spicer and Dojo are very comedic together trying to care for Master Fung. The threat of the Chi monster is incredible, even though he is not really on the side of evil. His power to take away a person’s chi and physical strengths, along with the mystery built up on the end of Season 2, help make him terrifying. However, the Chi monster replaces Omi’s stolen chi with Master Fung’s, but it never explains why he wants more. A nitpick, but one worth noting. Good Jack’s plan to trap the Chi Monster is very ingenious, along with splitting himself in half with the Ring of Nine Dragons, a plot point that cleverly comes in later. The battles in this episode are top notch. Master Fung, even in bandages and a wheelchair, is a worthy opponent for Chase Young. And of course there is the final showdown that this episode has been building up to. The game of Xiaolin Soccer is great showdown. Having the jungle cats transform into the warriors that they were before Chase captured them makes them even more formidable, and there’s the fan-favorite line “Sparrow eating hotdog.” However, the showdown feels rushed. The whole showdown is about three minutes long, with seven goals scored in that timeframe. There is a time constraint for these episodes, and not everything can be as paced as some would like, which I understand. The ending to this episode is a great way to start off Season 3. The music is stunning, Omi is back into his human form, and they are all Wudai Warriors, and Master Fung’s wise reasoning for all of them being Wudai Warriors makes sense. Having Chase Young tell Omi he would have destroyed good if he broke his word is a wonderful way for keeping your word to still look positive at the end of watching this. Omi kept his word, and the world was almost destroyed, but if he hadn’t kept his word, the world would be destroyed. Finding Omi is a great episode, and a good conclusion to the Chase Young Arc. It has a few minor issues here and there, but it is worth re-watching time and time again.

Retrieved from "https://xiaolinpedia.fandom.com/wiki/User_blog:LevenThumps/XS_Reviews:Finding_Omi?oldid=27634"
Community content is available under CC-BY-SA unless otherwise noted.